Chanting Sutras (in Japanese: Okyo) is an important part of the daily zen training in Japanese Zen monasteries. Sutras are buddhist texts, often lectures of the historical Buddha, which are chanted by the Zen monks at daily services (Choka), memorial ceremonies (Hoji), and special events. Among the Zen chants are also mantras or Dharanis without substantive content, Gathas (poetic verses), and dedication texts (Eko) that are usually solo chants conducted by the chantleader (ino). In Japanese Zen Buddhism some classical and most well-known sutras are the Hannya Shingyo (Heart Sutra) and the Daihishin Dharani (Sutra of Great Compassion). Other famous examples are the gatha of atonement, gatha on opening the sutra, or the Sho Sai Myo Kichijo Dharani (dharani for preventing disaster).

The Zen Buddhist texts are recited in Japanese / Chinese, which sometimes is fonetic. Of course the content of the text is of great importance, but the practice of concentration, breathing, and use of voice is equally meaningful.

The Japanese Sutra Drum (Mokugyo) is often used to guide the sutras with a steady beat. The pace of reciting can be pretty fast and the sometimes long and complex sutras can be serious training to follow and chant along.

On the Youtube Channel Zen Meditation & Chanting you find several examples of Zen Buddhist Sutras in Japanese and English, recited by Tom van Dijk, Founder of Groningen Zen Center. Tom spent over 5 years in Japanese Zen monastery Sogenji, in Okayama prefecture, where he was responsible for conducting Zen Buddhist ceremonies and memorial services (Densu), leading the Sutra recitation (Inosu), and playing the drums (Mokugyo and Taiko Hoku). The Youtube Channel has grown to over 1000 subscribers and new chants, sutras, and other Zen sounds are uploaded regularly. 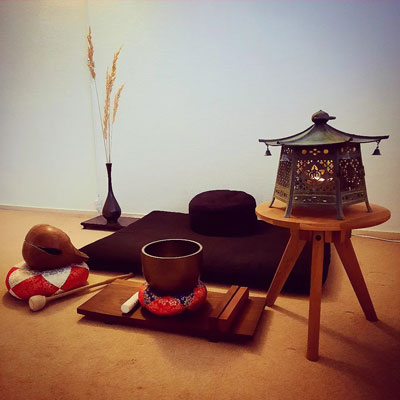